Employers of primarily hourly wage workers have been hit hardest by The Great Resignation, but several “white collar” industries, including health care, are also experiencing a worker shake-up. Health care providers were hit hard as COVID-19 took hold. Nurses, doctors, and other front-line medical workers absorbed the brunt of the pandemic. Still, the unemployment crisis that followed impacted the health care industry as well, resulting in over a million furloughs and layoffs in the industry throughout 2020.

The job market largely bounced back in 2021, but the health care industry is facing a new crisis (or rather, the continuation of a pre-pandemic trend). Wage workers in the restaurant, hospitality, and retail industries are not the only ones who are quitting en masse. Data from the Bureau of Labor Statistics (BLS) reveals that the health care industry is now experiencing its highest level of voluntary quits in over 20 years.

The BLS regularly releases data on the total number of workers quitting in each industry that it reports on, as well as the quit rate (the percentage of quits compared to all employment) for those industries. During the pandemic health care workers who were not laid off or furloughed were sticking around, doing the tough and challenging work of saving lives.  The average voluntary quit rate rose modestly from 2.0 in 2019 to 2.1 in 2020.

As vaccines became available, infection numbers started falling and the economy began roaring back. Health care industry workers seemed to finally find the breathing room to process their experiences from the previous year. For many, the result was not so positive.

Whether because of negative experiences from their employer or because of discontent with health care altogether, the quit rate in the health care industry increased 23% over its average from 2020. 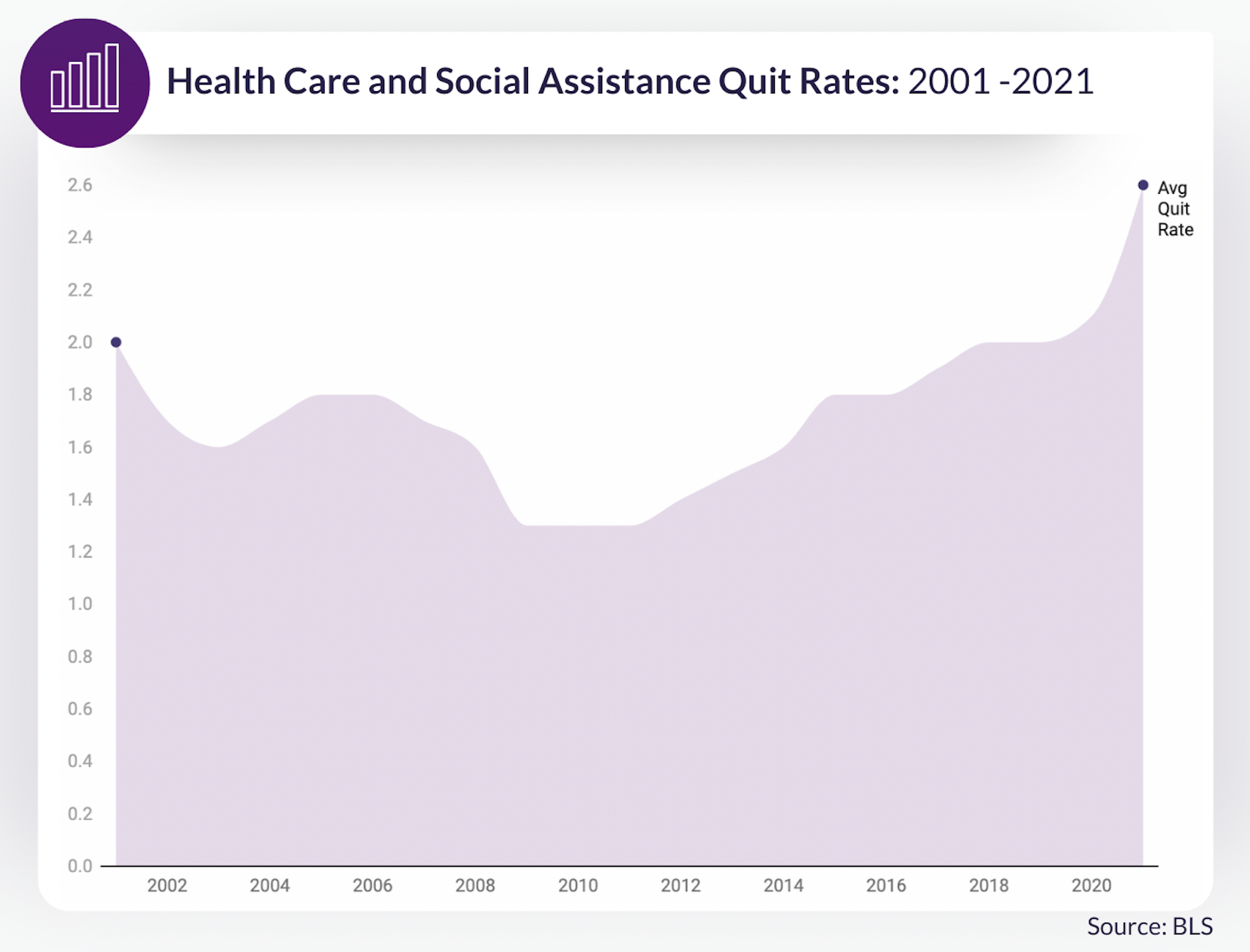 Between July and September:

The health care quit rate might sound small at an average of 2.6, but the health care industry employs over 20 million people. Hundreds of thousands of Americans working in this industry are leaving their employer each month.

The health care and social assistance industry had the third-largest number of people leaving their employers each month throughout the early months of the Great Resignation compared to other industries that commonly employ salaried workers or that fall within the economic label of “white collar”.

In raw numbers, the total number of voluntary quits in the industry rose from 472,000 people in May 2021, to 589,000 people in September. The industry experienced a 23% increase in the number of workers quitting in just 5 months. 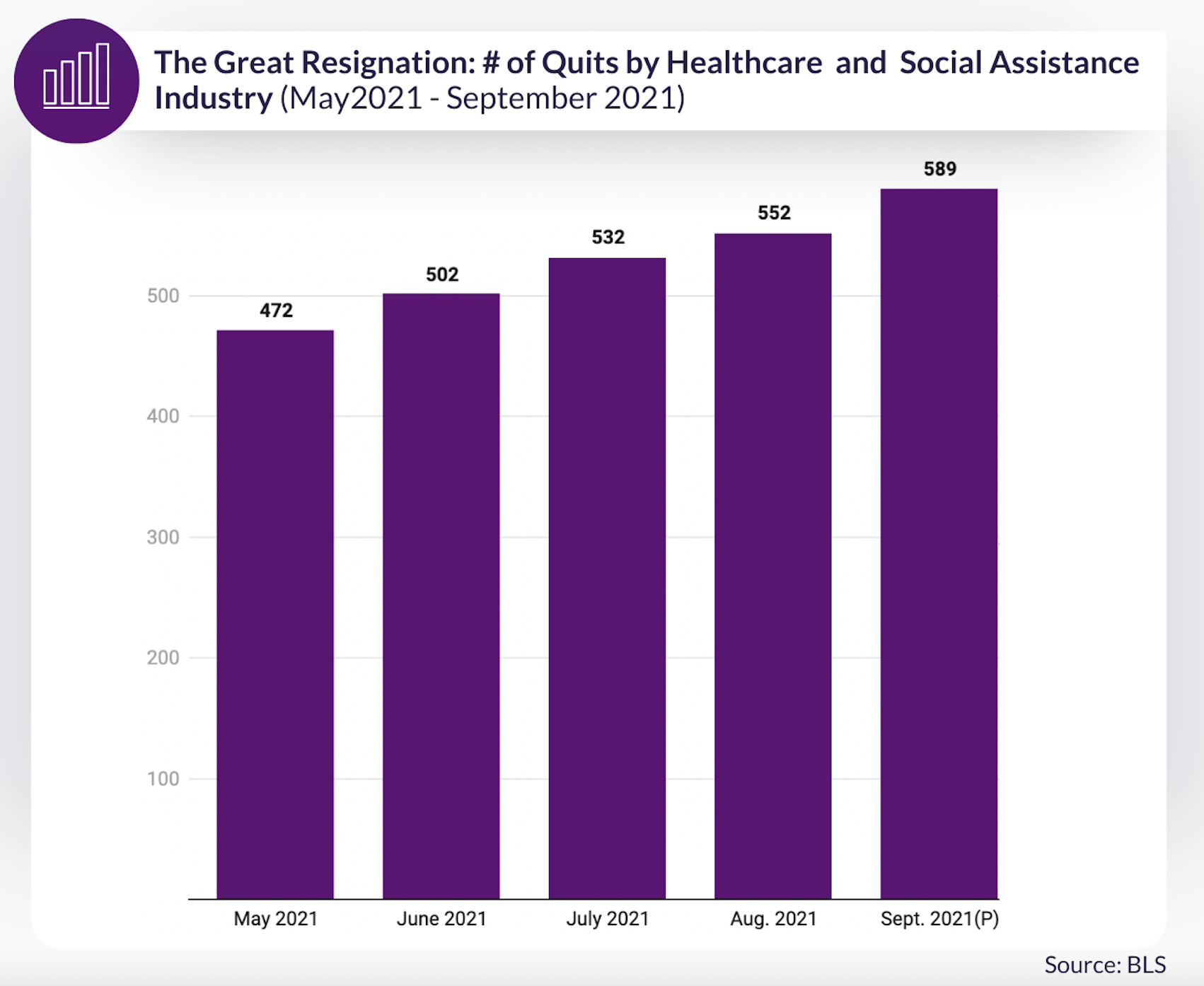 Existing BLS data from 2000 to now leads us to two distinct conclusions that are unavoidable for health care employers.

1. The health care industry has a retention problem that got worse in 2021

While most industries traditionally considered “white collar” have mostly avoided the brunt of the Great Resignation’s impacts, the health care industry has not been so lucky. Instead, employers in this industry are experiencing a worker retention crisis that’s nearly three times worse than most other comparable industries. 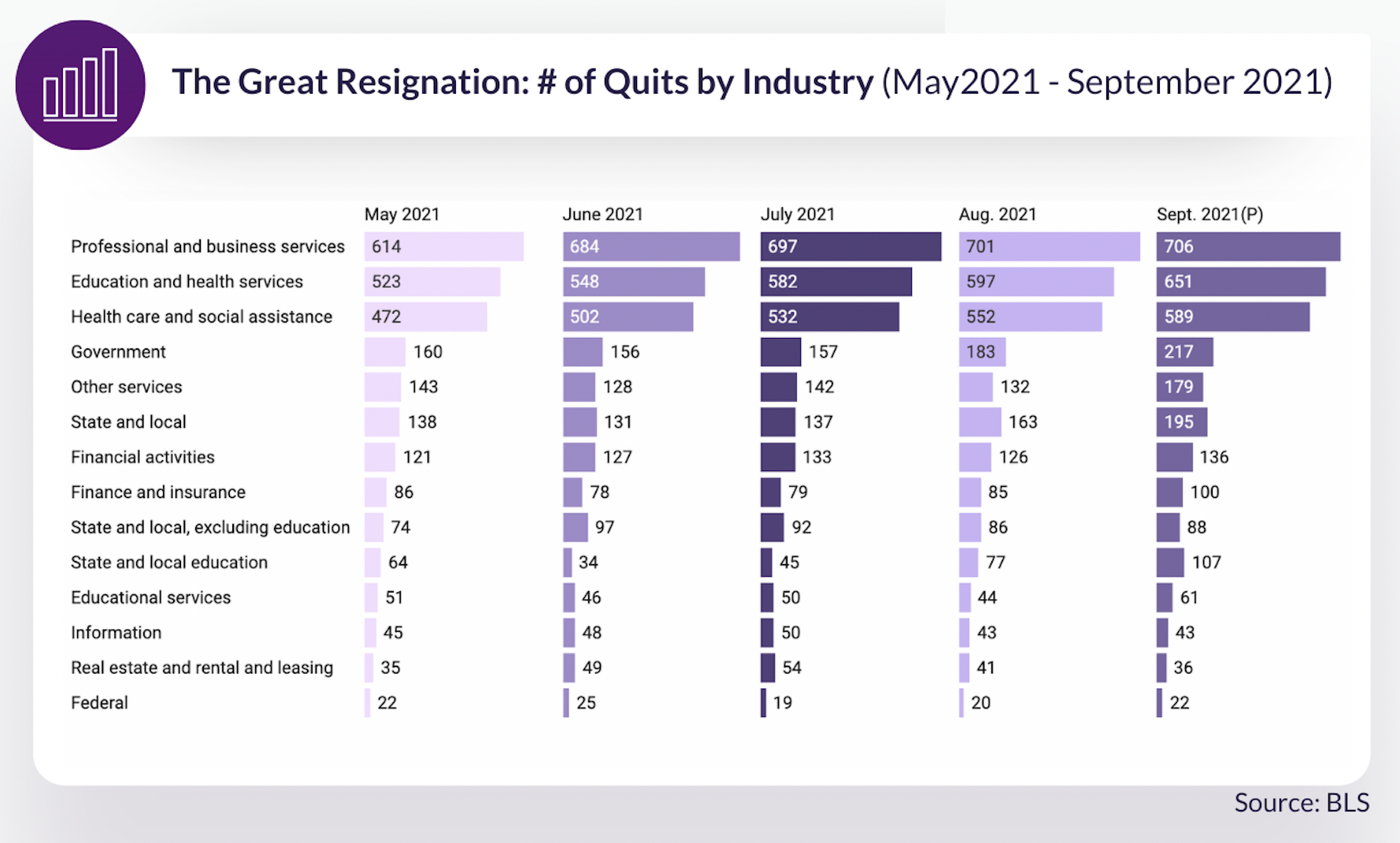 BLS data indicates that the health care and social assistance industry was already experiencing higher quit rates. That upward shift in turnover trend started after 2011. The pandemic has only served to massively accelerate the number of workers quitting annually.

In the restaurant, retail, and hospitality industries, many workers are switching industries or completely leaving the labor market. Tangentially, the growing Antiwork movement (and notably, the Antiwork Reddit forum) is heavily populated by workers from these industries. This isn’t the case for health care workers. BLS data indicates that those who are quitting their current employers are doing so to join companies that better fit their needs.

The industry is hiring more workers than ever, but employers are also losing workers at a fast pace. It’s clear that those who are quitting aren’t leaving health care, by and large. Instead, most are engaging in what LinkedIn calls the Great Reshuffle by quitting undesirable employers for those providing a better work experience.

The Great Resignation (or Great Reshuffle) and the reasons behind it are under numerous microscopes. Industry observers are attempting to determine why people are quitting their jobs and leaving for competitors, or why they’re completely leaving the labor force and joining the antiwork movement. A growing body of data appears to be indicating that workers want more out of their jobs than just a paycheck.

Pre-pandemic, workers may have been more hesitant to make these demands. Now, however, workers in almost every industry, including health care, are willing to put their income stability on the line, at least temporarily, to leave bad employers for those that are keeping up with labor market demands.

Saint Luke’s Health System in Kansas City is the third-largest employer in the Kansas City area. With over 12,000 employees, the non-profit hospital system found that it could ill-afford costly employee turnover, especially among frontline nurses. In 2021, the organization offered half a dozen mentoring programs that leveraged mentoring software, including two programs focused on engaging, training, and ultimately retaining nursing staff.

Given the BLS data on health care quit rates, Saint Luke’s strategy is a common-sense approach to retaining nursing staff. As well, in its 2021 National Health Care Retention & RN Staffing Report, Nursing Solutions, Inc. (NSi) reported that the average turnover rate for registered nurses was just over 18%. In the North Central region where Saint Luke’s operates, the staff turnover rate is higher, at 20%.

Thanks to mentoring software that uses a matching algorithm, Saint Luke’s is able to establish relationships for its nurses that have a higher success rate and better mentor-mentee relationships compared to other matching methods.

Mentoring software is increasingly utilized as an employee retention strategy for health care organizations. The benefits are often seen exactly where they matter most: dramatically improved retention rates.

The company’s forward-thinking approach has also given it a critical edge against competitors in today’s increasingly worker-driven labor market.

As noted earlier, the workforce trends we are seeing in the health care industry are not new. The pandemic is only serving to exacerbate an increase in quit rates across the industry that started after 2011.

Employers in this industry are witnessing an increase in voluntary quit rates and the acceleration of workers leaving for competitors unless structural changes occur with how they engage their people. Solutions such as mentoring programs have proven success, but companies that hope to recover from the Great Resignation quickly will need to act fast or continue to see their valuable talent walk out the door.

Sam Cook is the Content Strategist for MentorcliQ. As a former high school educator with nearly a decade of classroom experience, he has seen firsthand the transformative impact found through mentoring—both for mentors and mentees. He combines his successful second-life career as a writer with his experience as an educator to help demystify mentoring in an organizational setting.